Leftist NYU Provost: “Freedom of Speech Does Not Mean a Blanket Permission to Say Anything Anybody Thinks”

RUSH: Now, this New York Times piece, I have a question, a little pop quiz kind of question. You’re gonna think, “Well, Rush, this is silly, why even waste time asking the question?”

Why and what is the importance of free speech? Why is it in the First Amendment along with freedom of religion, freedom to assemble, free speech? It’s in there before any other liberty is mentioned. Why? A-ha. You think something as automatic, “Well, everybody knows that.”

“Because, Mr. Limbaugh, everybody must have the right to say what they think.” Yeah, but why? Why is it so important? “Because it just is. Mr. Limbaugh, it’s very crucial that you not be able to discriminate against somebody for saying what you don’t want to hear.”

This is not just a generational or evolutionary happenstance with these young little Millennial snowflake students supposedly being scared to death and hearing things. It’s much more hideous than that. This is not just the case of sheltered young, still-in-day-care 20-year-olds who have to be coddled and protected. There’s something much more hideous going on, and it is a direct assault on the First Amendment.

It is an effort that is underway at universities, the place theoretically where the open and free exchange of all ideas is the purpose of the place, so say those who romance universities. I think it’s always been a bogus premise anyway, but people that romanticize college, “Oh, yes, it’s a place where all points of view are expressed and open inquiry takes place.” We’re talking about 20 year olds that don’t know what they don’t know yet.

No, there’s an all-out assault on free speech. Political correctness is part of it. That’s censorship. And now this effort to behave in felonious criminal behavior to start riots and fires and destroy property to prevent a speaker showing up on your campus with whom you disagree, and to have the university coddle that? To have the left say we must understand the very sensitive and delicate nature of these young students. We must understand that they’re so easily shocked, so easily depressed, so easily rendered helpless. We must accommodate them. No, it’s all a giant scam that’s being run here.

The column that he wrote has the following headline: “What ‘Snowflakes’ Get Right About Free Speech.” What snowflakes get right about free speech? And let me share with you a couple of excerpts. “The idea of freedom of speech does not mean a blanket permission to say anything anybody thinks.” Oh, but it does, Ulrich. It most assuredly does. In fact, Ulrich, that is specifically what the First Amendment is.

That is specifically what the free speech clause in the First Amendment means. It is permission to say anything anybody thinks, and it has a political realm that was attached. Saying “fire” in a crowded theater is not something you think. That excuse is often given as a legitimate limit on free speech. You can’t insight riots. But we’re not talking about that and everybody knows it.

“The idea of freedom of speech does not mean a blanket permission to say anything anybody thinks.” Yes, it is. That’s its power. And because it exists, free speech is how such speech is dealt with and answered. At any rate, listen to what comes next. This is just one excerpt. I’m not gonna read the whole piece. I wouldn’t do that to you. I couldn’t handle it myself.

“The idea of free speech means balancing the inherent value of a given view with the obligation to ensure that other members of a given community can participate in discourse as fully recognized members of that community.” 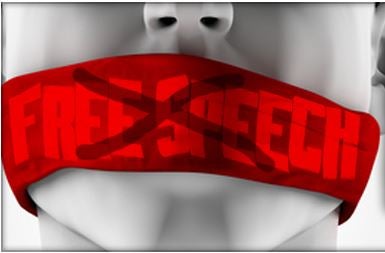 Now, do any of you have any idea what the guy means here? I know that numbers and words are hard to follow when you’re hearing them and not reading them. Let me run through this one more time, and I gotta take a break here coming up soon.

RUSH: Here’s the upshot of what this guy, Ulrich Baer, is saying. Free speech means balancing the inherent value of a given opinion with the obligation to make sure it doesn’t offend anybody else in the community. That’s what he’s saying. Okay, now, you might think, “Rush, we ought not be offending people.”

Sorry, folks. It’s irrelevant, when we’re talking about political speech as a means of shutting it down. But that’s not the point here. Do you realize the real danger here are the words “balancing the inherent value of a given opinion.” Well, now, tell me, who gets to do that? Who gets to decide the value of what anybody is saying and then who gets to proclaim, “You can’t say that anymore, and because you did say it, we’re gonna punish you”?

Who gets to say that? Who has this power to determine the inherent value of something anybody says? Well, I’ll give you one clue: as big an authority as they can come up with, preferably run by them. Ideally, the federal government would determine the value of what you say and be able to shut you down if they determine that you are violating the inherent values that are important to them.

And that’s exactly what these people want. And that’s what the free speech movement on campus really is. It is a blooming, burgeoning effort at creating a central authority that will be able to eliminate and punish any speech that modern leftists don’t want to hear.