The Democrats Have No Bench

RUSH: So there’s always the traditional response when there’s a State of the Union address or any other joint speech, joint session of Congress speech, the opposing party always gets a chance to respond. I think this started with Nixon. I think it started in the early seventies. And the reason I say that — it could have been earlier — but I was working my first job away from home. I grew up in Missouri, my first job away from home was in Pittsburgh.

I was working at a suburban Pittsburgh station, and it was an oldies station, so I was a disc jockey playing oldies, salted rot and mold. They called it Solid Rock and Gold. Anyway, one night I’m watching Nixon do a State of the Union or something and there’s the Democrat response, I said, “What the hell?”

I went on the radio the next morning complaining and whining about the Democrat response, and I got suspended for a week for injecting politics into the program. “We don’t do that here. We don’t talk about politics. We’re here to spin the tunes, play the records. We don’t do that.” I said, “Okay.”

The response is something that is fairly recent. I mean they didn’t do it back in George Washington’s day. It may precede that, but not by much. And the response, whoever draws this, it’s a no-win situation, because you’re coming out of the pomp and circumstance of the House chamber and the full-fledged media coverage, and especially if the president is a Democrat, the media is orgasmic during the whole thing, so the response just never has a chance. It never has a prayer. 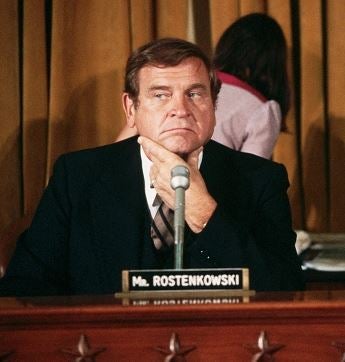 But the way it has traditionally been used by political parties is as sometimes a showcase or as an audition by up-and-coming, potential, hoped-to-be political stars. So the party hierarchy will choose somebody based on one of two things. Based on, you know, do we really want to pick a big gun and have it bomb out and have it hurt their career. Or do we want to pick somebody up-and-coming, go in there and deliver a hell of a speech and get noticed? And you may forgotten this, but Rostenkowski was chosen once to do the response. Dan “Rosty” Rostenkowski. And it was a home run. The media went bonkers over Rosty.

I remember John McLaughlin on the McLaughlin Group the following Sunday (imitating McLaughlin), “Rosty, Rosty,” you know how he spoke. It helped that he was a Democrat. He was ways and means. He was just a perfect, ideal Democrat, and because of that his response was always gonna be given a lot of weight. I forget, it might have been Reagan that he was responding to. I don’t remember the substance of it, I don’t remember what it said, but it was folksy, it was real, he had the ability to smile.

This is the guy that could take you out to a steak dinner, rob you blind while you’re sitting there, and you don’t know it. And then when you discover it, you’re honored. He was from Chicago, and he was a Chicago machine politician, and he had it down pat. But other than that, I don’t remember a response that is — well, his is the only one I can remember here. And that’s going back 40 years now.

So last night, imagine you’re the Democrats, and you believe all day long that Trump is a buffoon, he shouldn’t be president, that the Russians arranged it, that it should be Hillary, you’ve got sour grapes, you’re ticked off. Everything you’ve tried to do to destroy Trump hasn’t worked. He still has loyal support, you’re ticked off about it, and you can’t possibly imagine Trump hitting a home run. And so you’ve got one of two ways you can go.

You can either decide that you put somebody in there to do the response that does not have a political future because whoever’s gonna do this isn’t gonna have one anyway. And you don’t waste somebody on your bench who has a future by putting them in a no-win situation like this. Or, you go out and you choose somebody that you think is a perfect retort or response to Trump based on what you think of Trump.

Now, the Democrats went and got a former governor of Kentucky who, at one time, was also a Republican. But he is defeated. They stuck him at ten o’clock at night in a diner with a bunch of people behind him that looked like the walking dead. I’m watching this, “Okay, what are they trying to do here?” This guy does not represent the future. I mean he looks like Captain Kangaroo. He’s had his political day. He’s not somebody up-and-coming that you’re gonna vote for.

Okay, so why is he there? Is he there to respond to Trump in a way that’s going to be satisfactory to the Democrat Party base? It didn’t make any sense. The only thing I could conclude is something that I thought before this even happened, and that is the Democrats don’t have a bench. If you go back to after the election, the immediate aftermath of the election, and you watch the media and the Democrats talking about the 2020 election, since they lost this one, the only thing that matters next is 2020. And they started talking about their front-runners. And every person they mentioned is 70 years old right now. And the top of the list for Democrat front-runners 2020 a couple of weeks after the election in November was Joe Biden.

That was the number one choice. And I don’t remember who else they had in that list. But folks, they don’t — (interruption) Now they’re talking about Jerry Brown? Okay. Well, he’s been there, done that. He’s already sought it and lost it once or twice already. This is my point. Jerry Brown? They don’t have a bench. There is no young, up-and-coming star. Now, they were hoping that one of the two Castro brothers from Havana would be — sorry — Texas, San Antonio. They were hoping that one of those two guys — did I really say Havana? (laughing) You know what? That may actually — (laughing) — Castro brothers. Except one of them is dead now.

So they were hoping for the Castro brothers from Texas. But folks, this is a party — and I know things can change on a dime in politics. But right now, they are in a world of hurt. They are losing elections left and right. They have literally no representation in 80% or 90% geographically of the country. They don’t exist except on the coasts and border areas of Texas and Arizona. Other than that, they don’t exist.

Now, you could also say, “Yeah, but Rush, very few people live there.” I understand that. But still, in the heartland, they lost Wisconsin. They lost those big blue wall states that Hillary thought were automatic Democrat. They’re in a world of hurt, and they’ve got no rising star. The last one was John Kerry, Howard Dean. You look at their potential list of presidential candidates, and there just isn’t anybody that pops out.

Now, they do have a leg up with the media and the pop culture and the reins of control they have such as Hollywood. But their choice last night, therefore, of a former governor, this guy is… His name is Steve Beshear. He got beat by a Republican from a state that Trump won 63 to 33%. They put him, as I say, in a diner at ten o’clock at night, and he admitted that he was a Republican and a Democrat and an American and…

Did he say he was gay, did he say he was straight, did he say he was transgender? He was trying to cover all the bases. Now, I realize that many of you may not have heard it. Many of you said, “(Snort!) I don’t want to listen to this,” and I don’t blame you. So we have it here for you. This is the Steve Beshear’s Democrat response to President Trump’s joint speech or speech to a joint session of Congress last night…

ANNOUNCER: Now the honest and condensed Democratic response to President Trump’s first address to a joint session of Congress…

BESHEAR IMPERSONATOR: I’m Steve Beshear. I was governor of Kentucky from 2007 to 2015, when I was replaced by a Republican. Now, I’m surrounded by Southern white crackers in a diner I’ve never been in that serves old pie and fresh coffee. I’m a proud Democrat. But first and foremost, I’m a proud Republican and Democrat and mostly American. Like many of you, I’m confused by my last statement, but let’s move to something more exciting. I grew up in Kentucky in a small town where I inhaled too much formaldehyde in our family funeral home in Dawson Springs.

I had a pretty good run as governor, but havin’ Obama as president put a boat anchor around the neck of the Democrat who tried to succeed me, and we Democrats are committed to creating the opportunity to allow every American to try to play by the rules we keep changing so that they can’t move ahead. I’ve been married to my wife for almost 50 years. Mr. Trump, as a candidate, you promised to be a champion for families struggling to make ends meet. 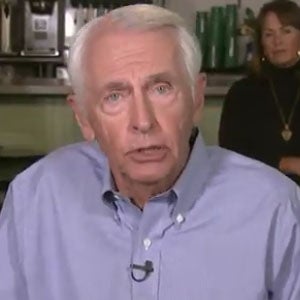 Why haven’t you already fixed everything President Obama screwed up in the last eight years? Does the Affordable Care Act need some repairs? Sure it does. Just don’t make it affordable. I’m not an alien from some distant planet. You know, I’m a military veteran myself, and I, like my party, miss the Soviet Union but hate the Russians instead. Look, the president can and should enforce our immigration laws — just not right now.

Another Republican president, Ronald Reagan, said something we hated him for, too. And I may be old-fashioned, but I believe our political system is broken — broken after eight years of that clown we elected almost a decade ago — and that’s why I’m here at this diner where the tables feel like they haven’t been cleaned in 20 years but the waffles are okay. Thank you.

RUSH: That pretty much sums up what it was, the Democrat response. (chuckling)

RUSH: Now, the Democrats say they chose Steve Beshear because he was a big proponent of Obamacare, and Obama used to cite Kentucky as a showplace for Obamacare. That’s really why they picked him, to save Obamacare, because he was… Now, I don’t know how people would know any of this by virtue of his rebuttal speech, but that was their thinking. The problem is, Trump cut Beshear off at the knees. If you recall during the speech, Trump cited Kentucky.

He said, “Governor Matt Bevin of Kentucky just said Obamacare is failing in his state — it is unsustainable and collapsing. One third of counties have only one insurer on the exchanges — leaving many Americans [in Kentucky] with no choice at all.” So they just cut… They knew Beshear was coming, I guess, or maybe they didn’t. But Beshear was coming because he supposedly did great things with Obamacare in Kentucky. (laughing) It’s almost Trump as the Roadrunner and the Democrats as Wile E. Coyote, at least in this current stretch.