RUSH: And we are back, and we welcome back to the program the vice president of the United States, Mike Pence.

RUSH: What was it like sitting behind the president last night while this historic speech was taking place? That must have been just a special moment for the entire evening.

THE VICE PRESIDENT: It was a great speech. It was a great night for America. But, as someone who had the privilege of serving in the House of Representatives as I did for 12 years, I just have to tell you, Rush, it was deeply humbling for me to be in that position and to be able to look out and see the way that President Trump and his message connected with people on the floor of the Congress, in the Gallery, and obviously all across the United States.

RUSH: Well, it didn’t look to be connecting outwardly with the Democrats who spent most of the time seated, but they had to hear it. I think that they were… They had to be a little alarmed and frightened last night. I have been telling my audience today that I actually believe, Mr. Vice President, that many Democrats in that chamber last night actually heard President Trump for the first time, really. During the campaign, they didn’t watch the rallies; they watched the news reports of the rallies. They never took him seriously, never thought he had a chance, and I think they were shocked last night listening to this, ’cause I think much of what he said, many of them were hearing for the first time. 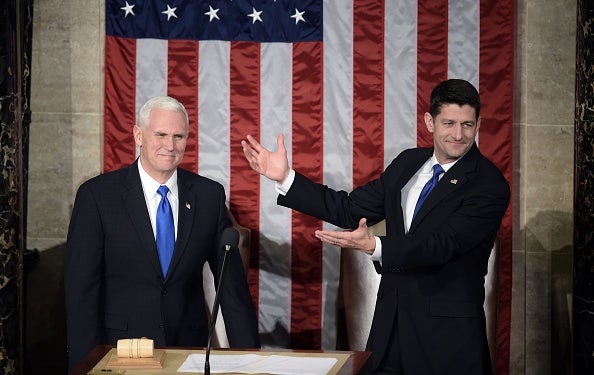 THE VICE PRESIDENT: Well, I think that’s very insightful, and to see the response around the country — you know, some of the reviews and some of the early polling that’s come in — I think gives evidence that may be true for many Americans. For me, what I saw last night was the president that I have the privilege to work with every day: Broad shoulders, big heart, a clear vision, obviously willing to fight for what he believes in. But someone who really loves this country and he wants to bring the Congress and bring the country together to solve some of these intractable problems that have been, you know, left to linger and unaddressed for decades. And so maybe it was just the fact, Rush, that the president in primetime had an opportunity — not in a political setting, but in a joint address to the Congress — to speak without a filter straight to the American people. And I just couldn’t have been more proud to be a small part of his presidency and of an administration I truly do believe can make this country great again.

RUSH: That’s exactly what happened. I think he was going over the heads of media and other filters, and that’s why I think I saw last night a bunch of people… Not just Democrats in the chamber. I mean, people all over the country. I actually believe — because of media coverage, I actually think — people saw the real Donald Trump for the first time last night.

THE VICE PRESIDENT: (chuckling) Right. That’s exactly right. Well, really it’s… The President Donald Trump I first met last summer is Donald Trump. And our families came together when they were considering us for this role, and, you know, I saw in him someone who has that boundless energy, that boundless optimism, obviously the strength of personality. But also, as I said, he’s got a big heart. He loves his family, he loves this country, and I thought that the way the president addressed the Congress and addressed the nation last night was just consistent with everything that my family and I have seen of him over these many months that we’ve been able to campaign with him and now serve with him shoulder to shoulder.

That’s why I got asked on some of these morning TV shows about the change or the change in tone. I said, “I didn’t see, really, any change at all. The president at the podium last night is the president I serve with every day,” and I’ll tell you, we just finished a meeting. He asked me to send you his regards, Rush. But we just finished a meeting with the congressional leadership, and we are rolling our sleeves up at the president’s direction and going to work on putting into practice the whole agenda that he laid out beginning with repealing and replacing Obamacare, cutting taxes, ending illegal immigration, rebuilding our military infrastructure. I think his speech to the nation and the Congress last night has created real momentum now for us to begin to move the Congress and to move the nation forward. 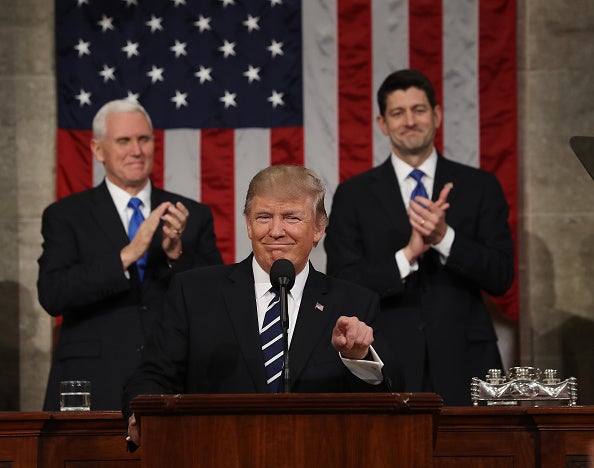 RUSH: I have just two minutes left — the break coming up is hard and I just wanted to tell you that — but I think that’s another thing, Mr. Vice President. I think he’s been working, you guys have been working this hard day one and before. It’s another thing people are, I think, starting to realize, that this man’s serious. And there was nothing… In terms of objectives or agenda, he’s been the most transparent candidate that I can remember. Everything he said last night he said during the campaign. He’s just fulfilling commitments and promises, right? And he’s following through on them.

THE VICE PRESIDENT: That is such a great point. President Trump is a man of his word. In the speech last night, the president laid out the very same agenda that he campaigned on. It’s an agenda to rebuild our military, to make America safer, more secure, stand tall in the world; to get our economy moving again by reducing taxes, rolling back excessive regulations. And what I loved about the speech last night — I know we’re short on time, Rush, but what I loved, too — is he took the time to talk about all the progress we’ve made so far literally since Election Day.

We’ve seen companies canceling plans to build factories overseas, announcing investments to create American jobs. We’ve been rolling back regulations. He’s been taking executive action to make our country safer. To have him have the ability to lay those things out and then describe an agenda — describe an agenda to the Congress — I think is exactly the kind of leadership people look for in their president. And, as I said, I just couldn’t have been more proud and more humbled to witness the 45th president provide that kind of leadership and vision to the Congress and the nation.

RUSH: I think it is important to point out: Every time I’ve spoken to you since you were chosen, you have said how proud you are, and I know you mean it. You’re not just being, you know, a loyal partner here. You really mean it. And I’ve picked up on it, and I, too, am happy that he recounted for people the voluminous amount of work that’s been accomplished so far, because it’s not… The message is not being told by the media. It was a great home run last night, Mr. Vice President. I wish we had more time, but I’ve gotta break here that doesn’t float. Thank you so much for being with us today.

THE VICE PRESIDENT: Thank you, Rush.

RUSH: Bye-bye. Back after this.