RUSH: Huntsville, Alabama. This is Larry. Larry, great to have you on the program. How are you, sir?

CALLER: Thank you so very much, Rush. We really love you here in Alabama. We love you Limbaughs. I’ve read your brother David’s book, and my daughter teaches my grandchildren out of the Rush Limbaugh books. She homeschools them, so, I wanted to say that first of all. But the second thing I wanted to say is, I’m so tired of all of these Republicans jumping in here, ’cause they’re not very smart in what they’re saying, Rush.

You know, if they’re for an investigation, let’s investigate the Hillary Clinton campaign. Let’s see how many of her surrogates talked to Russians and the Russian ambassador. Let’s go back and check out Obama. How many times did Eric Holder talk to a Russian before he became the attorney general of the United States? We here in Alabama, we love Jeff Sessions. He’s a good Christian man. There was a time in America when that would have meant something. It might not mean very much anymore, but it should.

RUSH: You know, that’s a great point. This is exactly… If I may go back to it, that is exactly the point that Victor Davis Hanson is trying to make today. It’s a brilliant piece, and I want to quote this paragraph again, because that is so right. In days not too far back, Jeff Sessions’ already established character would count for something. But it doesn’t anymore because of the way this country is in the midst of a transformation. The headline here: “Is the American Elite Really Elite?” And his point is: Are they really the best? Are they really the smartest?

Look at Obama’s cabinet. Not one of them had ever had a job, and yet they were considered the brainiacs of America. They knew better how to run things in the American private sector, and not a one of them had ever worked there — and Obama hasn’t, either, other than a couple of days at a law firm where he says he felt like he was surrounded by the enemy. And it really is a crucial point. We accept that these people are… We call ’em elites, we call ’em the establishment, but why? Well, it’s because they’re in Washington.

It’s because they’re elected, or it’s because they earn a lot of money. You know, folks, I have to tell you, in my own trail, some things have been amazing to me, and I can’t mention any names, but… (clears throat) How to explain this? Well, let me just wade in here and try. I have been amazed over the course of my life with people that my success has permitted me the opportunity to meet, and for 15 or 20 years, I have been amazed, surprised, curious when I’ve been told, “You need to meet that guy. He’s really rich!” I said…

Well, my silent reaction is, “Well, what does that make him worth meeting for?” “Well, the guy’s got a lot of money.” “Well, is that why you’re inviting him to your house? Is that why the only people I see at your house are the latest to have had it known that they’ve got a lot of money?” You know, I didn’t think anything of it other than that. I didn’t attach any deep meaning to it. I was just curious about it. “Why should the fact that somebody’s rich mean I want to be around ’em? Why, just because somebody’s rich, are they people I should know? What, are they gonna give me some?

“Do I sidle up to ’em and get to know ’em real well and they like me so much, ‘You know, Son, I really like you. Here’s a couple hundred million!’ Is that what’s gonna happen? No. So what is the point?” “Well, they’re rich!” “Yeah, but what does that mean?” “Well…” In some cases, they’ve got a great business, really successful. Okay, now, that interests me. But not the fact the guy’s rich. But I have to tell you, you’d be amazed at what a magnet that is. Look, in human terms I understand it. (chuckles) If you want money, you hang around people who’ve got it, for a host of reasons. But this is what Mr. Hanson’s getting at here: Just because you have a lot of money doesn’t say you’re the best as what you do.

You could be a blithering idiot!

His point is that it wasn’t that long ago that a person’s reputation really rested on the substance of their life. Their character, their morality, their achievement and their intelligence. And it was not that long ago that if you worked in a department store, you weren’t automatically considered a peon. If you worked on a farm or owned a farm, you weren’t automatically considered a hick.

You could have been a great farmer. You could have been acknowledged in your community as a person of great substance and wisdom — somebody who sets a good example, one good enough to follow. He says America’s elites have redefined what elite is to include them, and many of them have nothing other than the ZIP code they live in, a high income, visibility in the media attending various social events, and that’s it.

There’s nothing else to recommend them. And these are the people who end up, you know, writing our legislation and laws and determining what happens to other people the country. I could best read his paragraph, probably, to make the point. And he writes it from the standpoint that you have figured this out. So he says the public — that’s you — no longer believes that privilege and influence should be predicated on titles, brands, buzz, PR, wealth, ZIP code. You know, he’s assuming that you out there no long longer automatically are dazzled by any of that.

Instead, what the American people want to return to is respecting people who have demonstrable knowledge and proven character. The idea that brilliance and competence can be manifested in trade skills or retail sales or that courage can be expressed by dealing with hardship, factory work, or character can be found in an Indiana farm, all of that is foreign to the Washington Beltway. They look derisively at people who do that kind of work. And they do. Particularly on the left.

The left has their nose in the air looking down on everybody. Not everybody, but a lot of people. The Washington Beltway, Hollywood, Silicon Valley, you want to be known there? You want to be famous there, you want to be considered to have great reputation there? Well, make sure you live in the right ZIP code, make sure everybody knows that you have a huge income, make sure everybody knows that you are invited to all the cool things, and make sure you’re on TV a lot. And you don’t have to have a decent moral code, you don’t have to be particularly smart, and people are gonna think you’re special. He said this definition of elites, is the American elite really elite, is one of the things driving the attempted reclaiming of America from these people.

“Talk of removing the new president through impeachment, or opposing everything he does (the progressive ‘resistance’), is commonplace. Some op-ed writers and pundits abroad have openly hoped for his violent death. Mr. Trump is in a virtual war with the mainstream global media, the entrenched so-called ‘deep state,’ the Democratic Party establishment, progressive activists, and many in the Republican Party as well.

“The sometimes undisciplined and loud Mr. Trump is certainly not a member of the familiar ruling cadre, which dismisses him as a crude and know-nothing upstart who should never have been elected president. … In California, state planners and legislators focused on things like outlawing plastic grocery bags while California’s roads and dams over three decades sank into decrepitude. The result is crumbling infrastructure that now threatens the very safety of the public. Powerful Californians with impressive degrees also came up with the loony and neo-Confederate idea of nullifying federal immigration law through sanctuary cities. 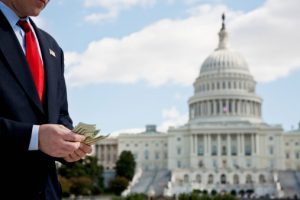 “Sophisticated Washington, D.C., economists produced budgets for the last eight years that saw U.S. debt explode from $10 trillion to nearly $20 trillion, as economic growth reached its lowest level since the Hoover administration.
For a year, most expert pundits and pollsters smugly assured the public of a certain Hillary Clinton victory — until the hour before she was overwhelmed in the Electoral College.

“Rhodes Scholar and former U.N. Ambassador Susan Rice lied repeatedly on national television about the Benghazi debacle. From the fabulist former NBC anchorman Brian Williams to the disreputable reporters who turned up in WikiLeaks –” These are the people like Glenn Thrush who called Democrat sources, “Hey, yeah, I’m a hack. I’m on your side. Just tell me what will sound best, and I’ll write it.”

“There are lots of well-educated, influential and self-assured elites who apparently cannot tell the truth or in dishonest fashion mix journalism and politics. Elitism sometimes seems predicated on being branded with the proper degrees. But when universities embrace a therapeutic curriculum and politically correct indoctrination, how can a costly university degree guarantee knowledge or inductive thinking? Is elitism defined by an array of brilliant and proven theories?”

No, not at all. It’s defined by where they live, who their friends are, what parties they go to, and how much money they’ve got, at least the public perception of all that. And our caller from Alabama, it wasn’t that long ago that Jeff Sessions’ local reputation here as a fine man of unassailable character would have mattered in this story. And now it’s not even a factor.