RUSH: This is a fascinating story. Have you…? You’re aware of — and, by the way, this is not unrelated, as it turns out. You’ve heard of Corporation A being fined X-number of millions or billions of dollars for soiling the snail darter or whatever, right? Have you ever wondered where the fine money goes? I doubt that you have. You probably think it just goes to the government. This is not the kind of thing that people dwell over.

I have occasionally been curious, but I have never even thought much about it myself. I just assume that the fines — and when I find out now what happens to it, I kick myself for being so dense and stupid. Having said that, do you get maybe a little hint of where the money goes? This story is from Ben Shapiro’s website, The Daily Wire. “Obama Administration Funneled Billions into Left-Wing Activist Groups.” So, you know, you see a corporation get fined — like BP, for the oil spill in the Gulf or anything else — and they get fined gazillions and billions of dollars. 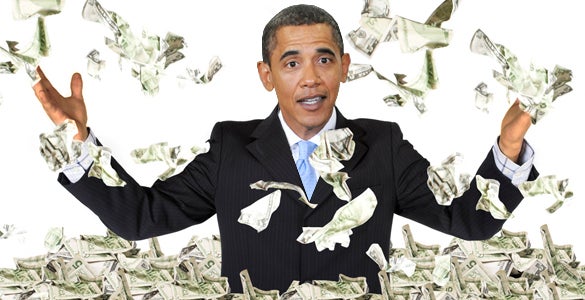 The banks, Toyota. What was it? Was it Volkswagen that misled people on their emissions controls and lied about it? They paid a huge fine. It’s billions of dollars, and you just assume it goes to the general fund. Nobody ever wonders who has control of it. “When big banks are sued by the government for discrimination or mortgage abuse, they can settle the cases by donating to third-party non-victims. The settlements do not specify how these third-party groups could use the [money].”

So what happens is, if you have a president like Obama and an ultra left-wing regime and you love to just fine corporations for the hell of it, you give ’em an option: “You can pay $20 billion to the federal government or you can give it to the Sierra Club, and then you only have to pay $15 million.” So the corporation says, “$15 million versus $20 billion?” “Yep, that’s the deal.” “Where do I write the check?” and the Sierra Club gets $15 million. I’m making up numbers here, but this is how it works. Get this:

“Investigators have accounted now…” This is the result of a congressional investigation. Now, I don’t think anything’s gonna come of it. This is the Republicans investigating, and they’ve uncovered a huge… I stop short of calling it a crime, but man, oh, man. This is big! “So far, investigators have accounted for $3 billion paid to” people who had nothing to do with it — they were not victims of whatever fraud that happened — because the corporations under the Obama administration were given the option: Pay the big fine to us at the government or pay part of it to a group that we designate.

And they designate left-wing activists like ACORN, like… I don’t know. Pick your name. How many left-wing nonprofits are there out there? “Critics say banks are incentivized to donate the [money] to non-profits rather than giving it to consumers, because there’s the charitable aspect and glow and: Boy, look at this corporation! It really cares. Yes, it destroyed this or that or harmed it. But look what they’re doing! They’re giving it to one of these wonderful left-wing activist groups. And this is how they get funded. And it’s a never-ending cycle.

Democrat administrations fine anything they can get a handle on and give the money to their own left-wing activist groups. Headline of the story: “Obama Administration Funneled Billions into Left-Wing Activist Groups.” Fox News had this yesterday. They reported on it yesterday. It’s a House Judiciary Committee investigation. I didn’t see it on Fox News. I only know about it ’cause of my show prep and other things. I’m not criticizing anybody here. I’m just saying nobody’s gonna hear about this. (laughs) I guarantee you this story will not ever show up in the New York Times.

Unless… The way it would show up in the New York Times is if the New York Times finds a corporation that didn’t give the money to a nonprofit and writes a scathing hit piece on the corporation for being inhumane and lacking compassion. “Legislation, called Stop Settlement Slush Fund Act of 2017, has been introduced by Lankford to address the scheme. ‘Congress must permanently end the abuses Obama’s Justice Department exploited to use settlements to funnel money to their liberal friends,’ said House Judiciary Chairman Bob Goodlatte…”

For eight years, this went on. I mean, this would not even occur (chuckling) to conservatives. When you think of fining somebody, the money would go to whoever got harmed. The money would be back to the private sector as quickly as it could. Well, theoretically. But we just do not think this way. “Here’s essentially how the ‘shakedown’ works, as outlined by Fox: ‘When big banks are sued by the government for discrimination or mortgage abuse, they can settle the cases by donating to third-party non-victims. The settlements do not specify how these third-party groups could use the windfall.”

So you give the money to Planned Parenthood and they can do anything they want with it. “‘So far, investigators have accounted for $3 billion paid to “non-victim entities.’ … As noted by the Competitive Enterprise Institute Center for Class Action Fairness Director Ted Frank, DOJ officials are essentially going after corporate defenders to ‘to fund their pet projects.’ ‘The underlying problem with the slush funds is we don’t know exactly where the money is going,’ said Frank.” So… And Erick Erickson has a story similar to this at his website, The Resurgent.

“The Real Reason Left-Wing Groups Are Freaked Out by Trump’s EPA Pick — Left-Wing groups are freaking out about Scott Pruitt, Oklahoma’s Attorney General and Donald Trump’s nominee for the EPA,” the Environmental Protection Agency. “It is safe to say that the collective meltdown over Pruitt is greater than over any other Trump pick. You probably have no idea why and it has nothing to do with climate change. Superficially, progressives are saying that Pruitt is a climate change denier and has no business managing the agency he sued so often.

“But that’s just cover. The real reason has everything to do with money. With the blessing…” Here we go. It’s the same scam. “With the blessing of the Department of Justice, the EPA has been going after major corporations and telling those corporations that they can pay a massive fine to the federal government or pay a lesser amount to various environmentalist groups. More often than not, to get the EPA off their backs, the companies fork over money to left-wing run environmentalist groups.

“Those groups then begin a vicious cycle. They start hounding the corporations that give them money, file complaints with the EPA, then get the EPA to shake down the companies for more money.” It’s a never-ending cycle. Your tax dollars end up funding all of these insane, unhinged left-wing radical rioting and protest groups, and environmental groups. And this guy, Pruitt — the new nominee to the EPA — has vowed to shut this down.