Fox News Guests: Rush Is Right About the Deep State 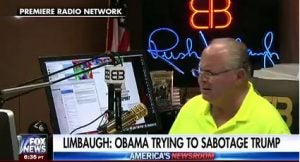 RUSH: You know, a curious thing. I made some very pointed comments about all this yesterday, pointing out that the real story here was the Obama sabotage and that going after the Democrats on the basis of hypocrisy never works and that doing so anyway is not a good thing because it accepts the premise. It accepts the premise that Sessions did something wrong.

And then we go and try to point out, “You know, Eric Holder did the same thing!” It doesn’t get us anywhere. Well, all of those sound bites were all over cable news today, and they even had panels to discuss what I had said. They analyzed what I had said, and one of them (which you’ll hear), Ed Henry on Fox News, said, “Well, you know, White House agrees with Rush but they just think they have to step back and go silent for a while and stop giving the Democrats fodder.” (chuckles) I said, “What? They think they’re responsible for this, that Trump’s being too bodacious, and if Trump backs off then the media will…?

RUSH: J. Christian Adams. He, by the way, has a piece today PJ Media: “U.S. Senator Colludes With Russians to Influence Presidential Election.” This is Ted Kennedy back in the 1980s, it’s actually ’84, colluding with Russian leaders to sabotage the reelection of Ronald Reagan. Details coming up. We’ve mentioned it to you before. Data comes from a release of KGB documents after the Berlin Wall fell and the Soviet Union imploded.

Chris was on Fox News, Fox & Friends today, on the Fox News Channel. Steve Doocy was talking to him, and said, “Did Sessions have to recuse himself?” Now, Christian Adams was in the DOJ working for Eric Holder. He resigned when Holder said there weren’t gonna be any prosecutions of the New Black Panther Party in Philadelphia for vote tampering at election headquarters, ballot box and so forth, polling place. Holder said (paraphrasing), “We’re just not gonna prosecute people of color here under my watch.” So J. Christian Adams resigned. He’s now consulting and writing. “Did Sessions have to recuse himself?” 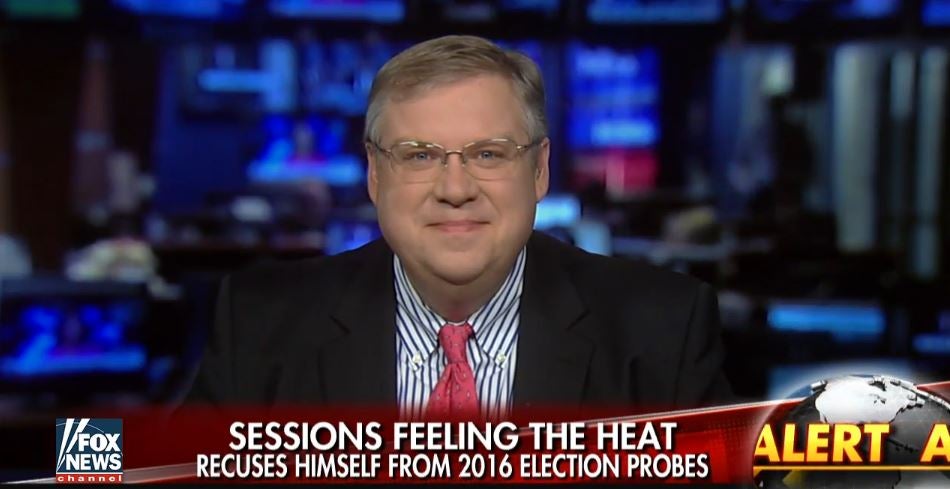 ADAMS: No, he probably shouldn’t have, either, but, you know, Steve, this is part of a pattern. First they came for Steve Bannon. Then they came for General Flynn. Now it’s Sessions. This is how the Democrats are gonna behave to delegitimize the president, to make Jeff Sessions worry about this instead of the corruption that Obama and Holder left in the Justice Department. It’s part of a governing strategy by the Democrats.

RUSH: The Dooce, Steve Doocy, then said, “Do you agree with Rush Limbaugh’s statement that he said, keep in mind the Obama administration on the way out, they scattered all this top-secret intelligence about the Russia probe across the government so everybody would be talking about it to sandbag and sabotage Trump? Do you believe that Rush is right about that?”

ADAMS: People need to understand this is just the beginning, what’s happening to Jeff Sessions. You’re exactly right. Rush is right. What they did, Steve, is they put information in the hands of tons of people in the department knowing they would leak. At the same time, the swamp is not being drained. You had radical Obamaites being elevated two days before the inauguration all throughout the department into political slots, into places where they can’t be fired easily. And they are still there. They are sabotaging the president like Sally Yates did right after the inauguration.

RUSH: That’s on his executive order and the travel ban. And here’s the bite I was referring to earlier. Also on Fox & Friends, their national correspondent is Ed Henry, and he’s in there, and Ainsley Earhardt said, “Rush Limbaugh says the writing’s on the wall, that these are just Democrats trying to sabotage Trump. What about that?” 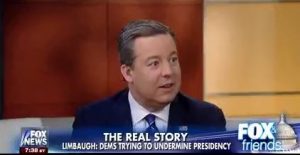 HENRY: I agree with his broad point that this is not about the Russians, this is not about Jeff Sessions. Rush Limbaugh is absolutely right. This is about the Democrats trying to explain the last election and also, now moving forward, trying to undermine Donald Trump at every turn. That part is true. Here’s the part that I think he failed to mention that I think Republicans need to think about.

The Trump administration needs to stop giving Democrats fodder on that, then. Look at Michael Flynn. And with Jeff Sessions, look, I heard what he said earlier, he didn’t commit perjury. Did he answer the question perfectly? Should he have cleaned that up? Probably so. And the president acknowledged that. So my point is, Rush Limbaugh is right. However, the Trump administration itself needs to stop stepping in it on this.

RUSH: Okay, grab audio sound bite number eight. This is continuing Fox News discussion on my incredibly perceptive statements yesterday. This is America’s Newsroom. This was Shannon Bream today with Mercedes Schlapp, who I think is the wife of Matt Schlapp, who runs CPAC. Anyway, so the question, “Mercedes, Rush Limbaugh basically said the Republicans are getting their clocks cleaned. They don’t close ranks. They go out there, they say negative things. They talk about Sessions needing to recuse and they’re playing defense. They need to learn how to play offense. They should never trust the Democrats.” 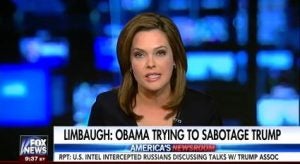 SCHLAPP: Well, I think Rush Limbaugh’s absolutely right in the sense that I think Republicans eat their own in a lot of ways. I think that, for example, in the case of Senator Jeff Sessions, Republicans need to stand by Jeff Sessions. So I think for Rush Limbaugh, he’s making a very important point here, Shannon, that it is about these Obama holdovers where you’ve seen leak after leak coming out of the White House in certain agencies, even leaks of classified information, which is against the law, where you have this feeling, this sense that the goal is to delegitimize the Trump presidency.

RUSH: Right. I’m always surprised when people agree with this, pleasantly so, ’cause it’s combative. Most people, “No, that’s not the way to go. You ruffle feathers this way.” So this has actually been somewhat reassuring.