RUSH: Here’s Rocky in Bloomington, Illinois. Great to have you. I’m glad you waited. How are you?

CALLER: Thanks, Rush. I’m a bit elderly and all. I’ve been a Democrat almost all my life, and the other day my son, Edmund — he’s in his sixties — came over and said, “We’re gonna listen to this guy talk,” and sure enough it was a speech that I believe the president made, and I said — first of all, I said — “Boy! Wake up! You’re sleeping! Edmund!” He woke up, and we listened to this guy, and I’m telling you, after I listened to that man, I believe he is JFK. I swore I was back when I was young. I listened to that man talk, and it reminded me of JFK, and I don’t believe I will ever vote for another Democrat in my life.

RUSH: So what speech of mine was I giving that you heard?

CALLER: I believe it was a speech by Mr. Donald Trump.

RUSH: I knew that! (laughing)

CALLER: From time to time, I get confused but I believe it was the president.

RUSH: I know. Was it the Tuesday night speech to the joint session of Congress? Was it this week?

CALLER: He was talking to the congresspeople in the speech.

RUSH: Okay, well, good. Now, see? So that one speech made you… Now, JFK for him? Model. JFK was it. JFK was young, glamorous, Camelot, funny, engaging. Congress loved him. I mean, that is like in my parents’ generation, Walter Cronkite. If you were gonna go into broadcasting, if you weren’t gonna be Walter Cronkite, you may as well not go into it. Even after I’d try and tell my parents that he was the epitome of left-wing bias. Well, my dad knew it. My grandfather wouldn’t believe it. (chuckles) JFK. That’s big, folks. That’s big. 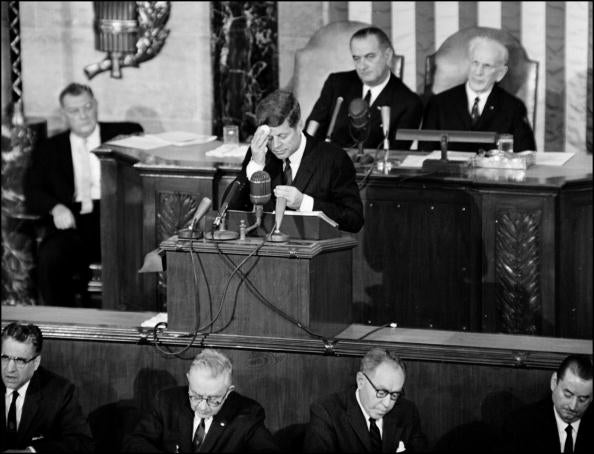 His 60-year-old son comes over, makes him watch Trump. (chuckling) I appreciate the call, Rocky. I think that kind of thing happened… You know, folks, do not doubt me. There are people who heard that speech, and it was the first time in their lives they heard Donald Trump say anything. The people who didn’t vote for him, didn’t watch his rallies. They only know what the media said about him. His son made him watch that speech.

I guarantee you that are millions of Rockys out there.

But there’s a lot of them that had that exact reaction, who had never heard Trump speak before. And I remember when I said this on Wednesday, after Trump’s speech, I had a lot of emails. “Come, Rush! It’s not… People aren’t that segregated anymore.” Don’t doubt me on this. The left, you do not know how they sequester themselves. Folks, they’ve got their little security jackets and bubbles they live in, and they don’t let anything in that isn’t preapproved. These are snowflakes. They’re not gonna let anything in that’s gonna upset them. I guarantee you, there are more people that heard Trump for the first time than you would believe in that speech Tuesday night.