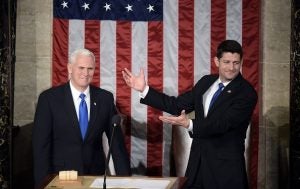 No, no. This is stand alone, and you are to be appalled at this. You are supposed to now be suspicious of Pence and his intelligence and maybe he’s engaged in nefarious activities! Maybe he was talking to the Russians, too, and that’s why he had a private server. You see where this could go? Now, never mind that the Associated Press and I’m sure the Indianapolis Scar and any number of other media outlets told us there was nothing to worry about, nothing to even see when Hillary exclusively used an unsecured, secret email account and server to conduct State Department business.

Nothing to see here! Not unusual. Remember all of the lengths the media went to try to assure everybody that it was quite common and Obama knew and that he was happy with it. Nobody had a problem with it. Now, all of a sudden, we’re supposed to be appalled that (impression) the vice president uses a private email account to do state business! The Indianapolis Scar “reported Thursday that emails provided through a public records request show that Pence communicated with advisers through his personal AOL account on homeland security matters and security at the governor’s residence during his four years as governor.”

Never mind “homeland security” could mean anything, and the “security at the governor’s residence” is not national security, so it’s not covered by any laws. But I guarantee you they’re trying to see if the Russian ambassador’s ever been there. This is exact… (chuckling) In a different light, this stuff is comical. You know, if you look at this in a certain light, it’s just the Democrats flailing away, and it’s hilarious. Except that there’s no push-back on it. Which there clearly ought to be. This ambassador at the White House 22 times visiting Obama. Why wouldn’t he be there? He’s a diplomat! I thought the Democrats love diplomacy instead of war.

These ambassadors are lobbyists.

They’re all kinds of people.

Some of them are secret agents.