Nobody Is Draining the Swamp

RUSH: This is Denise in Mount Dora, Florida. Great to have you on the program today. How are you?

CALLER: Oh, Rush! I’m, uh… I’m flushed with excitement at the thought that I get to speak with you. How are you today?

RUSH: Well, I’m glad you made it through. Thank you. I’m doing well.

CALLER: Oh, good. By the way, I just wanted to start off by saying at the top of the hour you had asked about anyone sticking up for Sessions? I don’t know if you came up with one, but I did hear Senator Cruz admirably defend Sessions yesterday, at least on one TV segment.

RUSH: Okay, that’s a second, ’cause I Googled it, and I came up with Tim Scott.

RUSH: There’s… Now, I didn’t see the story on Cruz. Not yet.

RUSH: I can’t dig deep in this stuff. I’m doing everything I do here in flash seconds, but I was able to scroll deeply enough to find Tim Scott. I know Manchin, Democrat from West Virginia, defended him, but I was specifically talking about Republicans. So you found Cruz and I found Tim Scott.

CALLER: But anyhow, the reason that prompted me to call which — which I’ve never done before — is that I’ve never really been one of those persons who goes into conspiracy theories. I usually just roll my eyes when people come up with one and I say, “Oh, come on. You’re just fishing for stuff and that’s a little out there.” But when you were talking today about any… Over the last, you know, several days and months you’ve been talking about Obama and then recently the deep state, with this whole bureaucracy thing in the background.

It got me thinking. You know what? When President Obama — and, oh, thank Jesus I don’t have to say that anymore. When he was president, it always it seemed to me that he was really not the one running the show but somebody else was setting the agenda from his administration, and it’s like there were puppeteers and he was the puppet. You know, he was just doing what the agenda was that they wanted to get done and he was a great talking head. You know, everybody loved to hear him speak and fawned at his feet. Well, now he’s gone but the puppeteers are still there, and I’m just livid. We voted for Donald J. Trump to drain the swamp. And to think that he might not be able to implement his agenda — which is now the people’s agenda, we voted for him. To think that he might not be able to implement it because those dang puppeteers are still there, I’m just beside myself.

RUSH: Well, Denise, nobody’s draining the swamp. I mean, you just said it. Nobody’s draining the swamp. Trump’s people are recusing themselves! Trump’s people said, “Yeah, I won’t play. I won’t participate.” The deep state’s not going anywhere. One thing about Obama. You know what you mean about the figurehead stuff. People pepper me with similar theories like that. Don’t downplay Obama’s involvement. This is what he does. What Obama really does is what you never see, this community organizing. Everybody asks, “What is a community organizer?” 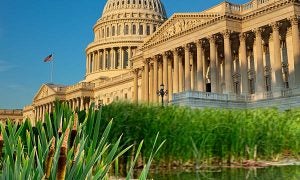 You’re seeing it. This is exactly what a community organizer does. Now, throw the word “community” out because we’re not talking about a Chicago neighborhood or ward here. We’re talking about the United States government, and you are seeing the real talents of Barack Obama and Valerie Jarrett and Ben Rhodes. All these people that were insist administration are coordinating this effort with primarily the New York Times, and the rest of the media is slaving off of that. But it’s primarily the New York Times, because everybody in the media thinks the New York Times is the bible.

So whatever is in it is safe to run and is gospel, and is unchallengeable. It’s infallible. So you’re seeing it. It’s not a conspiracy theory. Well, it’s a conspiracy in that people are conspiring to do this, but it’s not hidden. It’s right out in the open! Every New York Times story is the result of the organizational efforts of Barack Obama. He’s got people in place. The New York Times is even given the ghost up. They’re even explaining how they did it. Obama operatives staying there and having collecting and preserving the, quote/unquote, “evidence” of Trump and the Russian collusion, even though there isn’t any!

And the New York Times has also admitted that in now three different stories. They still haven’t found any evidence. They’re still looking. They’re preserving the evidence so they can eventually get there — and if it takes ’em eight years and they don’t find any evidence, that’s just fine, ’cause it’s a brilliant sabotage operation. The longer they can keep it going, the better. I’m sure they would love to find some evidence here, but there probably isn’t any because it didn’t happen. The thing is, they know it didn’t happen. See, that’s what rubs me wrong. Everybody involved here knows it’s all fake news.

The media doesn’t do news.

This is the advancement of the establishment, anti-Trump agenda.