RUSH: Trump signed his new executive order on the travel ban that halts America’s refugee program for 120 days. He had Tillerson go out there and announce it, and Kelly from Homeland Security go out there and announce it, and I’ll tell you something. I watched these guys. I don’t care what you think of Trump, when you watch Tillerson and Kelly go out and do this, you realize these are not political people. 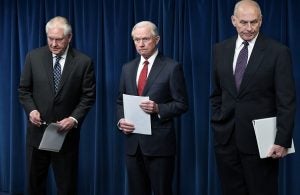 My impression was that these are two serious guys doing what they can to protect their country. They’re working hard to do it. And the message was clear: You want to come at us again, rogue judges? You go for it because we got this one battened down. So it’s essentially a 120-day ban — for those of you in Rio Linda, that’s like four months, a four-month ban on refugees. It eliminates Iraq from the list of countries ’cause apparently there’s a lot of interpreters there for the U.S. military. And it keeps the other countries intact.

Trump signed it around 11:30 today. That’s when he was supposed to sign it. Six or seven points that clarify some of the confusion in the first executive order. Among other changes, the new order will clearly exclude legal permanent residence. So green card holders are exempt. They weren’t in the first one. If you had a green card and you were out of the country, you couldn’t get in, even though the law almost requires you to be here if you have a green card.

So they’ve exempted green card holders. And this new version would no longer indefinitely bar Syrian refugees. In the first executive order if you’re from Syria you were barred for an indefinite time. They are now part of the 120-day ban. You can bet that this will come under legal attack, as did the first one.