Nate Silver, Still Trying to Figure Out Why Hillary Lost, Stumbles into the Truth

RUSH: You know, they’re still at the Drive-By Media, they’re still navel-gazing. They are still examining why the election happened as it did. They’re still trying to figure out why Hillary lost, ’cause it was such a slam dunk. They’re still in shock. They are still in denial. They are unable to accept what happened, and they really are trying to tell themselves that they can reverse this. They can get rid of Trump soon enough, early enough to, in all practical sense, pretend that this never happened. They can get rid of Trump. That’s what they’re working on, dreaming about, thinking of.

Well, one of their gurus, a guy named Nate Silver. He used to work at the New York Times. Now he’s taken his brilliant poll analysis company over to ESPN. It’s called FiveThirtyEight.com. And today was the ninth installment of a massive postelection analysis of what went wrong, the ninth installment! That means there have been eight installments prior to the one today. (laughing) This one is very long, but I’m only going to excerpt one part of it because it sums it all up. The subject here in the ninth installment from the guru Nate Silver: “There Really Was a Liberal Media Bubble.” It’s a tremendously long article. It’s the last in a series and it’s about how conventional wisdom led everybody astray. It’s about how conventional wisdom ended up fooling the Drive-By Media.

And here’s the excerpt I want to share with you. “That leaves independence.” — not e-n-t-s, but independence as a state of mind — “In some ways the best hope for a short-term fix might come from an attitudinal adjustment: Journalists should recalibrate themselves to be more skeptical of the consensus of their peers.”

That’s gonna be a tall order. Journalists are not curious about anything anymore. Well, better stated, curiosity is not what drives them. In fact, the desire to be the same, the desire to be on board with conventional wisdom is what drives them. They are not curious about anything they don’t believe or understand, and Nate Silver is saying there that if they want to avoid being broadsided again, they had better get outside this bubble and recalibrate themselves to become more skeptical of what all of them think. 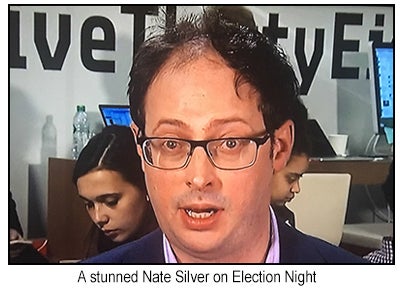 “That’s because a position that seems to have deep backing from the evidence may really just be a reflection from the echo chamber. You should be looking toward how much evidence there is for a particular position as opposed to how many people hold that position: Having 20 independent pieces of evidence that mostly point in the same direction might indeed reflect a powerful consensus, while having 20 like-minded people citing the same warmed-over evidence is much less powerful.”

Anyway, he’s nailed it here. He’s identified the problem with these people above and beyond the primary problem which is their ideology and their rigid inflexibility and their lack of curiosity. But he’s basically saying, “You people on the left and the media got nobody to blame but yourselves. You all wanted to be right, you all wanted to agree with each other and you all thought whatever each other thought was the most brilliant thing around.” No way Trump could win, no way Hillary could lose, not possible.

Not so much by how they shape public opinion, although that’s part of it, but because they just think they’re superior beings and they’re in the establishment and the establishment run things. I’m telling you, they remain completely discombobulated and they’re not even close to getting to a point where they’re going to like Trump or respect Trump or anything of the sort. So I don’t foresee any kind of a dramatic change in the state of play in Washington until the next crisis that happens does not involve him.