The Democrats Are Undermining Our Elections

RUSH: I have a question. It’s an open-ended question to which there are no answers, but I just want to ask them. If we think back to all of these media leaks and stories that there have been, from… Let’s just say since the election. We’ve had stories indicating a serious investigation of the Trump campaign and its ties to Russia. We’ve had unnamed intelligence officials — IC, intelligence community officials — saying this or that or the other thing. They’re unnamed. It’s the Washington Post, New York Times, CNN.

And, of course, the three networks — ABC, CBS, NBC — breathlessly reporting that this investigation is underway, that there are members of the intelligence community who have come across things so distressing that they have sought out media people in order to take the veil off of all of these things. The New York Times on January 19th and 20th ran two different stories. The story on the 20th had the headline “wiretaps,” wiretapped evidence, Trump campaign, Trump transition. We know there were wiretaps because, as I was just discussing, General Flynn was picked up talking to the Russian ambassador.

And you get back to, “Well, who ordered all of this?” And remember there was a New York Times story, the headline of which was: “Obama Administration Rushed to Preserve Intelligence of Russian Election Hacking.” Well, up against that we have Obama in March of 2016 and a couple of times subsequent to that later on in the year, pooh-poohing the idea that the Russians could have hacked the election, and on one of those occasions, Obama even chastised Trump for complaining about it.

“Hey…” Obama tried to act like the seasoned veteran and Trump is the neophyte rookie and they said essentially, “Hey, you’re in the big leagues now, boy. You don’t start complaining about things. You go out and win the election. Don’t start complaining about things. You just run your campaign and try to win.” He was pooh-poohing Trump’s effort, he thought, to create excuses. So clearly, there was an investigation going on, and it did involve wiretaps, if we are to believe the New York Times and the Washington Post. All of these things reported in the mainstream media. None of them were made up by Trump.

And I remember each one commenting on it that day as they happened. And then Trump says that he has been wiretapped at Trump Tower, and every one of these news sources — these papers and cable news networks — reacts with righteous indignation, denying it, claiming it never happened, it’s ridiculous, it’s absurd. And I remember thinking, “Well, how can this be? How can there have been no investigation?” Because this is what they were saying. When Trump alleged that he was being wiretapped, the reaction from all of these mainstream media news sources who had reported essentially that…

Not that he’d been wiretapped, but there was investigation. They were all denying. “What does Trump think? He’s not under investigation! This is absurd. This is paranoia. Who does this Trump guy think he is?” So my very naive question is, “Well, what was being investigated if Trump wasn’t?” Because when Trump threw out that claim that the New York Times printed and that he claimed that the Obama administration had “tapped the wires” at Trump Tower, is what he said, the immediate denials that were forthcoming were denials not just of the allegation that Trump had been wiretapped and that Trump Tower had.

And yet when Trump claims he was wiretapped, they denied it and acted like Trump was an idiot. I remember thinking at the time that Trump had just thrown a little grenade back at ’em and had forced them to admit that everything that had come before that constituted this unofficial investigation, had just kind of blown up and that the people who were running it had been tricked or panicked into saying there wasn’t such an investigation. Now, we come to today, where Comey says there is an ongoing investigation of collusion between the Russians and the Trump campaign, or an investigation of the Russians’ effort to undermine our election or what have you.

So just what are they investigating? If Trump was not and is not being surveilled — and, by the way, everybody is making tracks as fast as they can. Today in these hearings, everybody couldn’t wait to get to a microphone to say, in their own words, that there is no evidence whatsoever that Donald Trump had been wiretapped. “None! It’s silly. It’s absurd.” Comey said no evidence. Admiral Rogers at the NSA said no evidence. Every member of the House intelligence committee: No evidence. Both parties: No evidence. 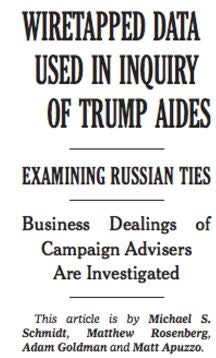 People can’t wait to humiliate Trump, embarrass Trump and say, “Nope, he was not being surveilled.” Well, how can that be? If there is an investigation, how can Trump not be part of it? What are they looking at, then? Is it Manafort? Is it Roger Stone, Carter Page, these former Trump campaign people that worked for him for a couple of weeks back last summer? And Comey says (paraphrased), “Well, I can’t give you the details. I cannot discuss ongoing details of an investigation. I can only admit that this is taking place because the Department of Justice has authorized me to break department policy this one time.

“Because it is so crucial and it’s so important that this is one of those times that the Trump administration, the Department of Justice, has authorized me to tell you that there is an ongoing investigation of the Russians and Trump campaign or the Russians and interfering in American elections.” My point here is, folks, I think that so much of this is literally about nothing. The FBI, anybody can have an investigation open and nobody ask a single question for months.

But there have been all of these contradictory statements, like “Obama Rushed to Preserve “Intelligence of Russian Election Hack.” What intelligence? How did they get it? If Obama was hurrying here to preserve intelligence of the Russians hacking the election, what intelligence? That means they’ve got some evidence. It would imply — or we would infer — they have some evidence here. And yet nobody has any, no matter where you go.

In every one of these media stories the last three months of last year up to the present, in every one of these stories with all of this damning information from these nameless intelligence people, buried in every single story in either the Times or the Washington Post is a small, little paragraph reminding everybody that despite everything in this report, investigators have still found no evidence of any collusion. It’s just been a bunch of supposition that has been reported and designed to look like mountains of evidence have been produced and is being cataloged and is being prepared for dissemination, when there isn’t any.

How is it that every aspect of this investigation has leaked except for the real evidence? With as much leaking as has gone on here, if there were evidence, that Trump and Putin or Trump and the Russian ambassador, Trump and anybody in Russia had actually colluded, don’t you think that would have leaked as well? Because everything else has.

And you know as well as I do that if any of these actors on the Democrat side, if they had even a morsel of evidence to support what all of this is supposedly about, collusion between the Russians and somebody to hack the election, don’t you think that would have leaked, because everything else has. And yet it hasn’t. So there is an investigation, but then there wasn’t, and now today there is again.

So if there is an investigation, what is it? What specifically — and they can’t tell us that. Comey specifically said, “Well, I can’t get into these details.” I want to re-ask another question that I asked, which I think is a key to this. The Russians hacked the election, right? Everybody believes that now as much as the sun comes up every morning, do you not? That’s been in the news so frequently, it’s been in the news for such a long period of time now, and there haven’t been any denials of it.

The e-mails of John Podesta ended up being made public because he mistakenly succumbed and fell to a phishing attack. “It’s still a hack, Rush, it’s still a hack.” No, it’s not. It’s not a hack. Nobody got into his computer until he let them. He opened the front door to his computer by clicking a specious link in an email.

But I’ll tell you what the media has found. In a tradition of media fake news, the media went to Nashville, Tennessee, and they have found two people who voted for Trump who claim they’re disappointed. A classic Drive-By Media story, disillusioned Trump voters. It’s in the Stack that I was planning on getting to today ’til this hearing stuff blew up.

So, again, what investigation, of who, if it’s not Trump? And if it’s not Trump, why are we even doing it? And this whole notion of undermining American elections, we’re doing a better job of that with all of this that the Democrats are doing combined with these hearings than anything the Russians theoretically even wanted to do, much less did.