Caller: Trump Will Find a Way to Win

RUSH: I’m gonna tell you what I think’s gonna happen here on health care in just a second. But Michael in Monterey, California. Hey, Michael, are you happening to watch this HBO series that takes place in Monterey called Little Big Lies, or Big Little Lies?

CALLER: No, I’m sorry. Actually, I don’t have HBO and cable, so… (laughing) Go figure. That’s a great question, Rush.

RUSH: Well, I actually can’t blame you for that.

CALLER: Well, I was in Portland while they were filming for Portlandia, or whatever that show was. But in any case, I’ve been a listener really since the beginning. I lived in Sacramento, you know, a couple of times over the years, so I certainly know your background. But I gotta say, too, that it is the great Hall of Famer Howie Long that actually got me really hooked on you several years ago back in the early nineties. So, thanks to Howie. I don’t know if you knew that.

CALLER: Well, I was actually an executive chauffeur in Los Angeles for a company called Music Express, and Howie was a person we had to pick up to take to a show for Roy Firestone, and I was listening to country music, and Howie said, “Wait a second. We’ve gotta change the channel here,” (chuckling) and he switched to you. So —

CALLER: No, Howie’s a great guy. At least in my experience, he was pretty great, so, uh… 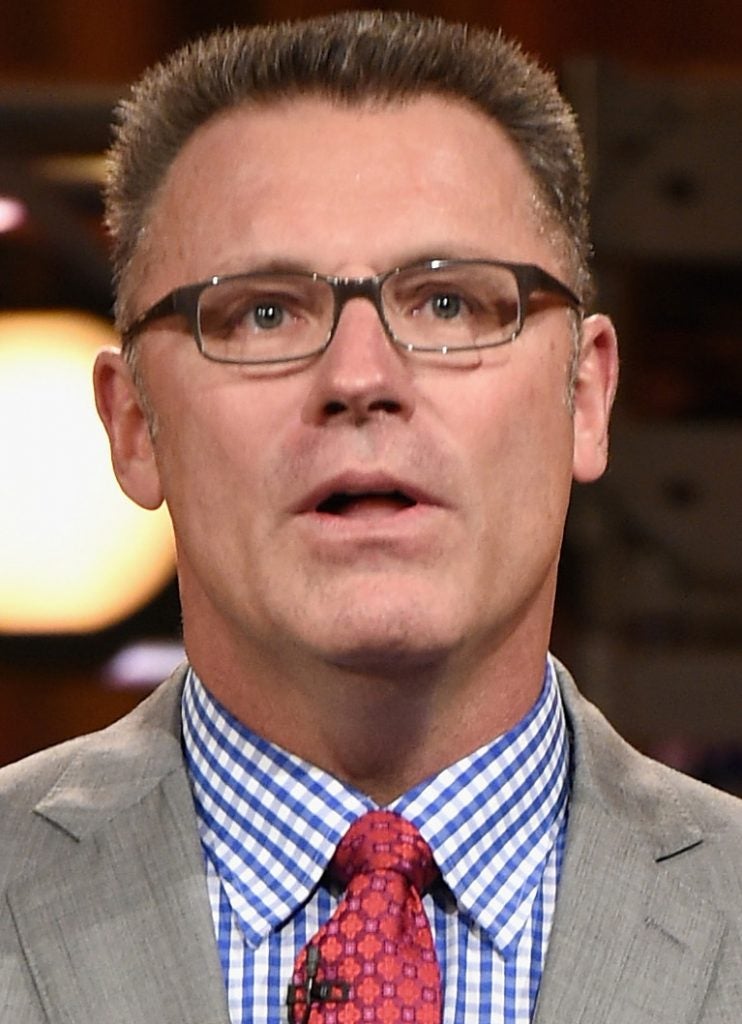 RUSH: The only thing he can say now is, “That was then. I gave up on this guy years ago.” He can save face that way.

RUSH: Howie’s in the Hollywood community. He can’t be out there saying that. That was very brave of him to tell you, the driver, to turn this show on.

CALLER: Oh yeah. Granted, that was in 1991. It was the year that he actually broke his arm in the playoffs, if you remember. So…

CALLER: So it’s a long time. But, you know, there was just as much pressure then as what Tim Allen has been talking about. You know, you could not let your conservative views out, you know, no matter where you were in Los Angeles County. So, you know, go figure.

CALLER: The only one that could get away with canning Terry… They did a little scrimmage on the show — this was quite a number of years ago — and Howie actually knocked Terry over. Terry decided he was gonna play center, and that’s another story. But in any case, you know, you are… It’s more than talent on loan from God. I got my ex-wife hooked on you a number of years ago — she still listens to you — and other people as well. But, you know, you said that during the election or during the campaign, you know, the Drive-By Media couldn’t ruin Trump or couldn’t destroy him because they didn’t make him.

CALLER: And they still don’t know that. You know, I don’t think the media or what I call “the Dummy-crats” know what they’re up against at all. This guy is a winner. I think he’s misguided on this health care bill with Paul Ryan. But, you know, that’s unfortunate. I think they’re going in the wrong direction. They’re not delivering what they promised, at least where this is concerned. So I think he’s being influenced by people. As strong an ego and personality as the president has, I think he’s being influenced a little bit by the Trump people in his administration.

RUSH: Now, hold it a minute now. Hold it a minute. I need to ask you about this, because I can tell, as a Trump voter, you admired his independence.

RUSH: You admired the fact that he was a doer and a winner and he listened to people, but it was his way that things were gonna get done —

RUSH: — and now you’re not the slightest bit disappointed that the Republican leadership in the House…?

CALLER: Oh, yeah! No kidding. I’m not disappointed… I don’t think I’m disappointed in Trump so much. You know, what else is new with Paul Ryan? Paul Ryan’s doing the same thing that John Boehner did.

CALLER: Paul Ryan was kissing up to Obama.

CALLER: I know. It’s completely turned around. It’s sad, but I think that he still has the gumption — the president, that is — to turn things around. But they’re doing the road show like they did for Obamacare, and now they’re threatening people’s seats if they don’t vote for it. You know, these are tactics even going back to George W. Bush with the whole, you know… (pause) Oh, you know, basically —

RUSH: Weapons of mass destruction?
CALLER: Well, that, and what else is new? But… And this whole thing with Comey is upsetting. I mean, the tables are turned, but they don’t… I think you pointed out on your website that, you know, they don’t like Trump because he’s questioning everybody. But they were gonna try to ruin the election for Hillary, supposedly, and like you said she ran a bad campaign that took people for granted. They just thought they were the shoo-in that they weren’t. I go back to the days (chuckling), you know, when you were basically fighting the Clintons’ corruption during President Clinton’s two terms, and so, you know, what else is new? Hillary has not changed. They are just as much involved with the Russians as they supposedly think Trump’s people do.

RUSH: All right, but look. I still think we’re glossing over this and I think this is a big deal, and I just want to make sure I understand this. You’re a rabid Trump supporter. You’re a loyal Trump supporter. You believe in Trump’s ability to get things done. You believed it during the campaign and you thought that’s what he was gonna bring to Washington — and, by the way, he has. You know, he won this thing with Merkel. He won this thing with NATO. He won the thing with TPP. He’s winning everything he’s taking on.

RUSH: The media doesn’t report it, but in terms of substance, Trump is winning everything. But this doesn’t look like it. This looks like Trump is letting Ryan dictate the way this is gonna be. And you seem to be saying, “Well, yeah, it disappoints me, but I still love Trump, and it isn’t gonna matter.” Is that right? Do I have that right?

CALLER: No. And I wouldn’t describe myself necessarily as rabid, either, frankly, but —

CALLER: Loyal, well, yes, because I followed his career. I’ve read all of his books. I know exactly, I think, you know, what the man is. But I think that they’re going in the wrong direction. The health care bill —

RUSH: Well, I know, that’s the point. You think he’s a winner, you think that they don’t know who they’re dealing with, and yet the Washington establishment, the way this appears, as we sit here at this moment in time, it appears that the establishment’s desires on health care are carrying the day. And it appears that Trump wants this thing simply to say he got it done. Because what’s in this does not contain a couple of the key things that he promised.

I don’t mean this in a political promise sense. I’m talking about substantively. When he was talking about Obamacare substantively, about why it’s bad, about how it could be improved, these two things, the health savings accounts and making insurance companies able to sell in every state, you know, getting rid of the state line, those are two key ingredients that are not in this as we sit here at this moment in time. This is why people are writing about this today the way they are. It’s the same story about what do you call this, do you call this Trumpcare, or do you call it Ryancare. 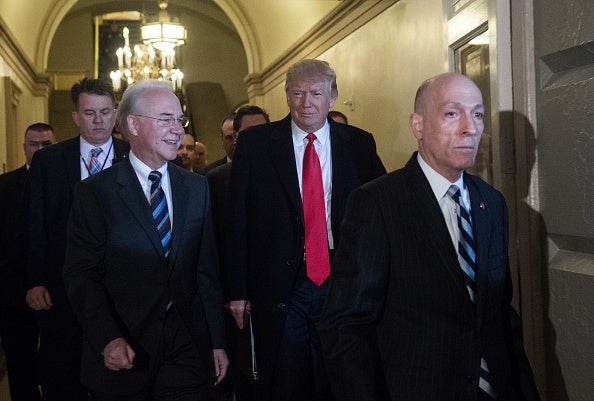 And then, let’s add something to this. I happen to know a lot of people who are upset because they wanted tax reform. Tax reform for a lot of people is the first and easiest way they’re gonna have more money in their pocket. And they believed the promises about this. They believed that Republicans believe in tax reform. The Republicans have been saying so for the last seven or eight years. Tax reform, get rid of Obamacare.

The Republicans’ excuse has always been we don’t have enough power. Well, now they’ve got it, and now they’re hedging, now they’re hemming and hawing. And a lot of people, it’s easier to get a tax cut than it is to go out and get a new job, new year, big raise, so there are a lot of people, just because they want to have more money, want this tax cut. And it is now being held prisoner to health care reform. And here’s how.

The Obamacare repeal and replace, as it’s being touted, saves a lot of money. Theoretically, this reform reduces a lot of the spending, and it is that money that is going to, quote, unquote, fund the tax cut. Therefore, if this bill goes down, there isn’t going to be tax reform. That is why, we are told, the stock market is down today. Last time I looked, which was hours ago, it was down 175, down 188 now. I don’t know how they know this stuff. But they say that’s why the market is down, 188, because there’s a little fear out there that if this thing bombs out, this health care, then there isn’t gonna be tax reform.

And this is one of the levers that Trump and Ryan are using against everybody who opposes it. If you defeat this, then tax reform going down the tubes is gonna be on you. So there’s a lot tied up into this, and that’s why people think, “Trump took this as the first thing, the first major initiative? Why do this? Why not do tax reform first or something else.” But he did, and this is where we are.

And our caller here, Michael, thinks that Trump’s a winner. He thinks that the Democrats and even the Republicans still don’t know who they’re dealing with here. Now, this isn’t over. And it depends on whether you have faith in Trump. If you believe like Michael that Trump hasn’t changed, he’s still this outsider guy who’s running rings around these people in the establishment who don’t yet know it, who haven’t figured it out, who don’t know what they’re up against, then Trump still has some rabbits to pull out of his hat.

Maybe this state line business, maybe at the last minute they’ll throw that in if they have to in order to get votes in the Senate. Who knows. It isn’t over yet. And I don’t believe Trump is finished doing whatever Trump does in situations like this in order to claim that he won, or rather than just claim it, in order to win. But a lot of people are watching eagerly, and make no mistake, there are a lot of people hoping this bombs out, and many of them are Never Trumpers on the Republican side too. Do not forget that.