RUSH: Floyd in Orlando, hey, we’re up to phones and it’s your turn. How you doing, sir?

CALLER: Well, pretty good, Rush. I’m a longtime fan of yours. This is the first time I’ve gotten through.

RUSH: Well, I thank you very much and sincerely for that.

CALLER: I used to always go to lunch a 12:05 just so I could listen to your show.

RUSH: Man, I’m blown away. I appreciate that.

CALLER: My question was, if Trump and the Russians colluded in the election, then how did all the Republican senators and congressmen and governors win as well?

RUSH: Well, the Russian hacking was nationwide, they hacked into all the states and they did everything. They were in full anti-Democrat mode. I mean, once you start hacking, you can’t stop.

RUSH: It’s actually a great question. I’m answering facetiously, of course, ’cause it is a great question. Okay, if Trump won because the Russians and Trump colluded to beat Hillary, how did the Democrats also end up losing in all of these states? The Democrats have less power, in terms of holding elective seats, in Washington than they’ve had since the 1920s. Man, these Russians are good. We’ve gotta learn how they did this.

RUSH: You know, based on the brilliant comments of our previous caller, if the Russians hacked the election in order to damage Hillary, how do they explain all the Republican wins in the Senate and the House and all of the states? It’s a great question. There’s a story back on I think it was the 16th, five days ago, by guy named Brian Kennedy, Real Clear Politics. And he addressed the literal substance of the claim that the Russians wanted Trump to be president as opposed to Hillary.

And his point, that if the Russians were actually picking a president that they would prefer, the last person they would choose is Trump. And here’s a portion of his piece. He said: Never in the last 50 years have the Democrats believed that the Soviets and the Russians are even capable of doing bad things to the United States. Let me expand on that. I realize many of you are alternately new to the program or young and really don’t remember the history of the Cold War, United States versus the Soviet Union.

Your experience is with the Russians and Putin, but going back to the sixties, seventies, eighties, Cold War era where the Russians were the Soviets, the Soviet Union and Soviet expansionism, worldwide communism was the objective, you may not have any perspective on it. But back in those days, the Democrat Party was the biggest friend the Soviet Union had in the United States. And I’ll give you just one example, although there are countless.

The Soviets were attempting to establish a client state, Nicaragua, and they had their Soviet-sponsored communist leader there, a guy by the name of Daniel Ortega. And there were opponents in Nicaragua called the Contras. They were the modern equivalent of freedom fighters. They were attempting to prevent their country from going communist. Nobody in their right mind wanted communism anywhere. People died, walls were built to keep people in. There was no liberty. There were political prisons. It was poverty stricken.

No matter where you found communism, you found people living in poverty, living in fear, living with no liberty or freedom whatsoever. The biggest friend that Daniel Ortega had in his effort to establish a Soviet client state was the Democrat Party, and particularly in the House of Representatives. But it had a share of Senators too.

Now, one of the leaders of the House back then was a guy named Jones, and he was from Oklahoma, Democrat. He went on to run the American Stock Exchange in Chicago. I think his name was James Jones, but I don’t want to confuse him with Jim Jones of that cult that drank the purple Kool-Aid on their way to the mother ship. This guy and Fort Worthless Jim Wright, congressman from Texas, a guy named George, California guy. Keep forgetting his name now. But these people were all supportive of the Soviets and of Ortega. 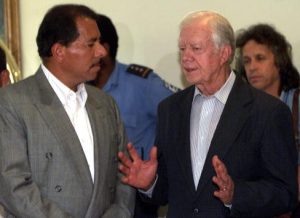 Daniel Ortega would come to the United States and be escorted around Manhattan on a shopping spree by the trio Peter, Paul, and Mary. I remember a photo of Daniel Ortega being walked into a department store to buy sunglasses by Peter, Paul, and Mary. He was a popular figure much like Che Guevara was or Fidel Castro. And Reagan was supporting the Contras and doing everything he could to oppose the establishment of a Soviet client state in our hemisphere in Nicaragua.

Well, the short version of the story is that Ortega, after surviving a vote in Congress to defund the Contras, flew off to the Soviet Union one day. After a big win in Congress for him, he flew off to the Soviet Union trying to get $500 million to bring back, and the Democrats wrote him letters saying, “Don’t embarrass us like this anymore. You don’t let us vote for you and then immediately run off and palsy-wowsy with the Soviets.”

They were embarrassed. They were profoundly angry. George Miller was the guy from California. They sent Miller, John Kerry, a bunch of guys went down there to tell Ortega to clam it up, to hide their support for his communist state. So Mr. Kennedy here is right on the money. Never in the last 50 years have the Democrats believed that the Soviets or the Russians were even capable of doing bad things to the U.S.

The U.S. deserved it. The U.S. deserved what we got. The Soviet Union was the model of the future if they just could have gotten it right. It was gonna be utopia, equality, fairness, sameness and all of that. So given that the Democrat Party has no history of disliking the Soviet Union, the Democrat Party has no history of opposing the Soviet Union or Russia, “We are being asked now to believe that the Russians wished to influence a U.S. presidential election. This master stroke of statecraft by Putin was designed, however, to bring to power a man, Donald J. Trump, who has pledged to rebuild the United States militarily and economically. 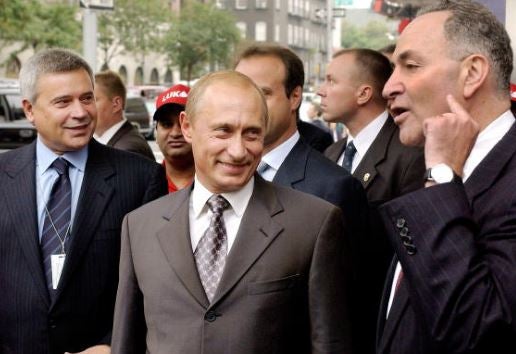 “Trump has detailed his intent to build a national missile defense, modernize our strategic arsenal to match that of Russia and China, ensure our ability to dominate the high seas … guarantee our ability to project power with an improved air force, and have an intelligence and cyber capability second to none.” How in the world does that help the Russians?

“By contrast, Hillary Clinton, following the policies of Barack Obama, stated she would, by not building missile defenses … continue the policy of vulnerability to Russian, Chinese, and Iranian ballistic missiles; delay the upkeep and modernization of our nuclear weaponry; and, pursue a reduction of our conventional military forces.” She would gut the military. “On traditional strategic grounds, it defies logic that Putin would have preferred Trump to Clinton.”

In any normal day Hillary Clinton would have been a godsend to Putin. Somebody who thinks the United States military’s too big, has too much outreach, is too powerful, somebody who believes the United States has been the problem in the world and owes the world deference and apologies here and there, that would be right up Putin’s alley, somebody that’s gonna continue to dismantle and transform the United States away from superpower status. That’s what Putin would want.

Instead, we are led to believe that Vladimir Putin wants a guy who is a bigger strongman than even he is? And I thought that was well stated. Again, that’s Brian Kennedy, Real Clear Politics.

RUSH: Gary driving through Idaho. Great to have you on the program, sir. How you doing?

CALLER: How you doing, Rush. Man, it’s been so long I’ve been trying to attempt to get in to you for years, ever since the beginning. I’m from Roseville, California.

RUSH: Roseville, California! Well, welcome. It’s great to have you here. What’s up?

CALLER: My point is, you know, I can remember when campaigning and, you know, in our natural elections it used to be a lot more wholesome and traditional, and, you know, life itself has become less wholesome and traditional in our values and stuff. And this whole thing about the collusion of the Russians, there’s no collusion. The only body colluding is the Democratic Party themselves. This is all they could come up with. Their strategy has just been nothing but fueled by hate.

And it’s just my point. They’ve strayed away from natural, you know, wholesome — I mean, back in the past, 30 years ago, we would have candidates might pitch something at their opponent, but it was just maybe on a difference of opinion on their policies or something like that to persuade their voters. But if it wasn’t for this, it’s gonna be something else and it will be because they’re fueled by hate, and they’re constantly gonna come up with something to shoot down the conservatives or the Republican Party.

That’s their motive. That’s their whole goal. And it’s just a prime example here what we have with the collusion, made-up propaganda that didn’t happen, never happened. And if it wasn’t for this issue, it’s gonna be something else, and when this blows over, there will be, I assure you, you know that and I do.