Terror in the U.K. as U.S. Media Bashes Trump for Laptop Ban

RUSH: Now, let’s move on to this terror business here in the U.K. Because there is this story that’s been circulating out there for two or three days, and I shared with you the headline from the Washington Post moments ago: “Trump Won’t Allow You to Use iPads or Laptops on Certain Airlines.” Trump. Donald Trump is denying you, if you’re on a certain airline flying into the United States, Donald Trump is denying you the chance to use your electronic device. 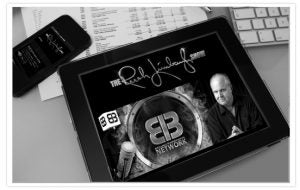 “From Tuesday on, passengers traveling to the U.S. from 10 airports in eight Muslim-majority countries will not be allowed to have iPads, laptops or any communications device larger than a smartphone in the cabin of the plane. … So why is the United States doing this, and how can it get away with it?”

Don’t you mean why is Trump doing this and how can Trump get away with it? Well, the story here says that the U.S. says it’s not all about security. There is an alternative explanation.

“Three of the airlines that have been targeted for these measures — Emirates, Etihad Airways and Qatar Airways — have long been accused by their U.S. competitors of receiving massive effective subsidies from their governments. These airlines have been quietly worried for months that President Trump was going to retaliate. This may be the retaliation.” The United States is weaponizing interdependence.

Do you realize, folks, how utterly bogus this story is? And this is the best example of many today that I could cite for you of how unbalanced, out of kilter, and insane the media has become. “Three of the airlines that have been targeted for these measures … have long been accused by their U.S. competitors of receiving massive effective subsidies from their governments. These airlines have been quietly worried for months that President Trump was going to retaliate,” against their subsidies, and this may be the retaliation? Are you kidding?

So the way Trump is gonna even the subsidy ruler is by telling passengers on these airlines — and it’s not just these three, by the way. There are many more airlines. These three are part of a larger group of airlines — that Trump is now weaponizing interdependence?

The AP’s version of this story: “No New Threat Led to Airplane Laptop Limits, Officials Say — U.S. and British officials said Tuesday the decision to bar laptops and tablets from the cabins of some international flights wasn’t based on any specific threat but on longstanding concerns about terrorists targeting jetliners.” 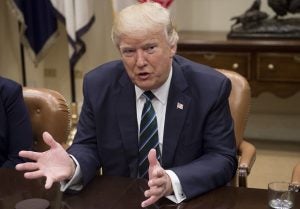 Wait, there’s another government involved here? Wait, wait, wait, wait. We just kind of read “U.S. and British officials.” You mean the Brits have instituted the same ban on electronic devices on certain airliners coming into the U.K. just like we have in the U.S.? Well, shazam! It looks like somebody other than Trump is doing the same thing Trump’s doing. I wonder if Trump’s making ’em do it.

So the Washington Post blames it all on Trump as an evil way of getting even with governments that subsidize their state airlines. The AP says it’s the U.K. and the United States, but there’s nothing behind it. They’re just doing it because they’re paranoid of Muslims. And that means they’re bigots and racists.

So the Washington Post: “Trump Won’t Allow You to Use iPads or Laptops on Certain Airlines.”

AP: “No New Threat Led to Airplane Laptop Limits in the U.S. and the U.K.”

Washington Post, no reference here of terror threat. They say there isn’t any terror threat. Trump wants to get even with other governments subsidizing their airlines. The AP says no threat. The U.K. and the Brits are doing it just ’cause they are imagining another jihad from a Muslim terror group because they’re racists and bigots. And Slate magazine says that it’s ’cause Trump is misguided and xenophobic and is flipping off the business community. Yet the New York Times says flights from 10 countries over ISIS fears. And do you know to know what this really is about? ‘Cause I have that here.

“Laptop ban on flights ‘is based on intelligence about an ISIS plot to target the West gathered during the raid on Yemen which killed Navy SEAL’. The intelligence centered around al-Qaeda’s ‘successful development’ of compact battery bombs that fit inside laptops or other devices, sources claimed.”

In other words, there is a credible threat. It is a credible threat based on intel that was gathered during the raid in Yemen, in January, a raid that Obama had approved before he left office. The military commanders said they couldn’t launch until they had a new moon. They needed a totally dark sky. There wasn’t a new moon until after Trump was inaugurated. Trump signed off on the deal. He had nothing to do with the strategy, the actual operation. He just signed off on it.

The raid was conducted and we know the details. They somehow knew we were coming, claiming they heard the drone of our drones, they heard the sound, and a SEAL was killed and the terrorists were hiding and dressed as men and women and children and so forth inside mosques or what have you. And everybody proclaimed the mission an abject failure. Trump said, “No, no, there was some really valuable intel gathered.” People pooh-poohed Trump as insane, stupid, and a lying sack of you know what.

It turns out there was intel gathered, and the intel gathered from the raid claimed that ISIS has perfected bombs that work and go inside batteries, inside electronic devices that you would use on the cabin of an airplane: a laptop, an iPad, or an iPhone. And when they learned of this intel, they banned flights from 10 different countries where the intel said people had been perfecting this.

RUSH:  So we are now being led to believe that Donald Trump colluded with the U.K. to deny airplane passengers the right to use their laptops, their iPads, and their iPhones.  Is that right?  U.K., United States, Trump colludes with everybody.  They say Trump is unbalanced and insane and all this.  How about this?  How about the guy who compared the attack on Pearl Harbor and the attack on 9/11 to Election Day 2016?  You know who did that?  That would be the famous Thomas L. Friedman of the New York Times. 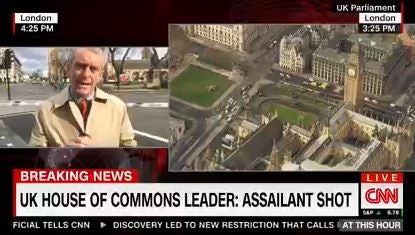 ROBERTSON:  This is an iconic landmark in London. We’ve talked about this already.  It has long been a concern of the security services that it could become a target, and — at the moment — the police are saying — at the moment — describing it as a terror incident until they get further information.  There has been that concern that it could be, uh, a target of such an incident and that’s why security around the building has been strengthened in recent years. That’s why there are armed police. That’s why there are barricades. That’s why cars can no longer get close to the building. This one was prevented by the fence and by the wall itself.

RUSH: What?  What?  W-what did he say?  Did he say wall?  Did he say there’s a wall around Parliament and that it worked?  Really?  Nic Robertson says there’s a wall? He’s praising the fence, he’s praising security measures, he’s praising the wall that kept this car from doing even greater damage?  And yet this is the same guy that no doubt supports sanctuary cities harboring known criminals, felons from apprehension by the U.S. government if they happen to be illegal immigrants — and no doubt opposes a wall to protect this country.

RUSH: And now the House of Commons has been suspended after the incident at the U.K. Parliament, and the latest on this is that a full counterterrorism investigation is underway into the attack outside the U.K. Parliament according to a police commander, who adds there are a number of casualties, including police officers. Now, that’s interesting, ’cause I’ve been watching the Drive-By Media, and the Drive-By Media talks about one death and a car plowing through some people, but they’ve been downplaying it.

At least CNN, to the degree I have been able to pay attention to it. I catch glances, I read the chyron graphics on the screen, and I did see one point when it was stated that it was being considered a terror event. I could detect, ’cause I have these detectors, that CNN was not happy about that. And there probably are even Drive-By outlets out there that are upset about that, that “Trump will use this! Trump will use this!” And this is what I mean by these people are the ones that politicize everything. And it’s not just Trump.

You know, whenever there was any news of anything at all, the Drive-Bys always examined it within the context of, “Was it helpful for Obama?” It’s one of the things that has driven me crazy about the media for years, particularly when there have been Republican presidents or conservative initiatives, things that are tackling definite problems in America. We have serious, serious problems in this country, and when there are efforts made to address them, the media never talks about the substance of it, only the politics of it.

RUSH: Here’s Frank in Charleston, Illinois. Frank, I’m glad you called. Great to have you on the program, sir. How you doing?

CALLER: I’m doing great, Rush. How are you?

RUSH: Fine and dandy. Thank you much, very much.

CALLER: Hey, mega homeschooling dittos from a family of seven in Charleston, Illinois. We really appreciate you, Rush.

CALLER: Real quick, I’m busy at work and I’ve got Bloomberg TV on in the background, and they’re basically discussing the event that fits President Trump’s narrative, and they say he’ll probably use it for political gain, but as of yet, no comment from the White House. And I think they’re interviewing someone from the State Department. Unbelievable.

RUSH: You’re talking about the terrorism incident in the U.K.?

CALLER: As of yet, no comment from the White House.

RUSH: No comment from the White House on whether Trump will use this incident for political gain. Which is exactly what the Democrats do with all of this kind of stuff, instead of ever trying to solve it. Oh, man.