The Drive-Bys Want to Know: Who Will America’s Anchorman Blame?

CECILIA VEGA: (outdoor noise) This is why he put this ultimatum down and laid it out there.

MELISSA LEE: …ultimatum, essentially, that the president has given…

JEFF ZELENY: …giving that ultimatum that now is the time to do this.

CHARLIE ROSE: President Trump issued an ultimatum last night to House Republicans. … Why do you think an ultimatum will work now?

RUSH: That did happen. I’m very convinced. (chuckling) In fact, it may even include tax reform in it. They’re loaded for bear. Now, grab sound bite number one. This is last night on CNN. It’s on a program called CNN Tonight. I guess that’s supposed to mean something. I don’t know who hosts it, but the guests are CNN senior political analyst Mark Preston, Daily Beast columnist Matt Lewis, and senior political correspondent Nia-Malika Henderson, and they’re having a panel discussion about the Obamacare repeal and replacement bill, and get this exchange…

PRESTON: Let’s put aside that it’s Donald Trump right now and he tends to go after his enemies. In Washington, it’s all about blame. If it doesn’t work out, who are we gonna blame, right?

LEWIS: It’s not just, “Who does Donald Trump blame?” Who does Breitbart blame?

LEWIS: Who does Rush Limbaugh blame? 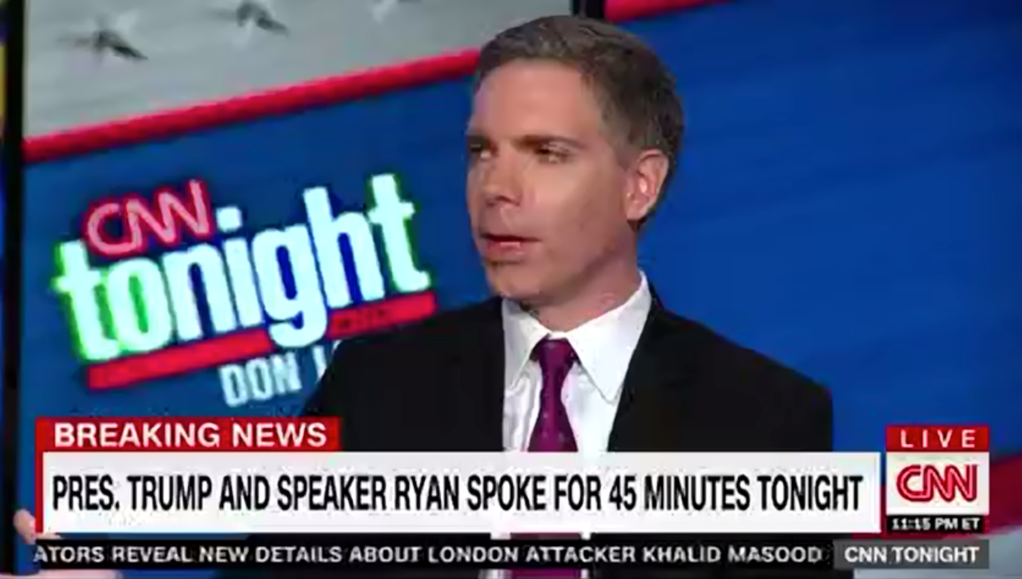 RUSH: “Who does Rush Limbaugh blame?” That’s the story. Who am I going to blame if the bill goes down? And that Matt Lewis who said, “Who does Rush Limbaugh blame?” And the answer, Nia-Malika Henderson said, “Paul Ryan! Paul Ryan! Paul Ryan!” So… (interruption) Well, I’m not gonna… I don’t even know that it’s gonna fail. The whole point is all these people are convinced it’s gonna fail. They were convinced Hillary was gonna win. They were convinced Trump was gonna lose. They were so convinced that Hillary was gonna win and that Trump was gonna lose, they weren’t even talking about collusion being the reason for it.

The reason Trump was gonna lose is ’cause he’s a bigot. The reason Trump was gonna lose is because he’s a pig, because Trump is outrageous. He’s mean-spirited. He’s politically incorrect. He makes fun of people. There was no way he’s gonna win. Hillary was gonna continue Obamaism, and that meant perfection and… They weren’t even talking about collusion. They weren’t even talking about it! The collusion they were talking about was the Russians hacking the DNC server (chuckling), which just illustrated how they screwed Bernie Sanders, not how the Russians helped Trump. (interruption)

Well, we don’t know it’s gonna fail. (interruption) You mean if it does fail, who am I gonna blame? I’m not gonna answer the question. I’m not gonna answer a hypothetical. It’s a hypothetical that it fails. Why should I participate in this bout of pessimism, defeatism, and negativism? I’m sorry, I instinctively recoil from that stuff. Now, these guys revel in it. They revel in defeatism, pessimism, negativism. They channel it, they talk about it, they analyze it. Naturally, if this vote is at 3:30 or after, then that’s gonna be after this program ends today.

So for those wondering (chuckles) who I’m gonna blame, they’ll have to wait ’til Monday. I might hide a little blurb on my website to give some indication. We have this little section there called Just In From Rush. Whenever I feel like throwing something out… I half the time forget that it’s there. You know, we’ve got this brand-new website design, and it’s awesome. But I forget that we added this feature — and I’m the one that demanded it! Sometimes I just forget it. And then I’ll get caustic emails from subscribers.

“What, nothing Just In lately, Rush? You’re not thinking about things, huh?” I say, “Oh, my gosh, I haven’t posted a Just In in a long time.” So I might throw out… (interruption) Well, depending on how it happens. How can I know who to blame here if we don’t even know to blame anybody? We don’t know it’s gonna fail. Now, you’re trying to suck me in to naming names here on a hypothetical that it fails. I don’t know. You know, my gut, instinctive answer to things like that is to find the nearest Democrat, ’cause I think when you want to talk about failure and what…

“Don’t, Rush!” I can hear you. “That’s a cop-out, Rush. We’re talking Republicans here. The Democrats are not a factor.” They are when you get to the Senate, and that has a lot to do with the way things are being done in the House. But you can never… Look, I get blue in the face. You can never forget how establishment Washington, establishment Capitol Hill wants Trump to fail. This is… It’s not even personal in many ways, just self-preservation. Look, you’ve spent your life trying to get into this elite club, and one of the reasons you want to get in is ’cause it’s really, really special, and you’re in it because not just everybody’s qualified — oh no!

It’s really special, and they do things that other people just can’t do. They know things other people don’t know. They know things other people are not allowed to know. They are really, really important people in the establishment. Well, the last thing they want is some neophyte flying in on a gold-plated airplane (laughing) taking over and showing everybody how, “Hey, it’s not that complicated, and it’s not that hard — and in fact, much of what’s been going on here is a bunch of BS.” So they don’t want… And I’m not sure Trump is aware of this, folks.

To be honest with you, I’m not sure Trump really knows how much institutional opposition he has. Not political. But just institutional, in terms of him being the outsider. If you’ve been running… Let me use this term loosely. If you’ve been running a scam for decades, and you’ve been getting away with it, and one of the ways you get away with it is you keep what you do and how you do it removed from public view… I mean, the things that really happen, the people that really make it happen, the things end up really happening, you don’t see. You hear it discussed in traditional political terms, but the real power behind the scenes, you don’t see it. And it all gets upset one day by somebody that has never spent a day in that system.

It blows up your entire universe.