RUSH: “Italy could soon become the first Western country to offer paid ‘menstrual leave’ to female workers.” This will no doubt create protests among the LGBT community in which there are transgender men who claim that the addadictomy nevertheless maintains the menstrual cycle and that they should get to leave as well. We’ll let the Italians deal with that one.

We are successfully exporting liberalism. Folks, this is one of my long held stratagems. Those of you who have been listening to this program for a long time will recognize this. I haven’t mentioned this in a while. But I’ve thought one of the ways that we could counter economic competition from all over the world, like from the ChiComs or from the Japanese, would be to export liberalism, export feminism, export labor unions, export this kind of stuff, family leave, paid medical family.

You know, let these nations suffer the pain that America suffers with all this left-wing gobbledygook that is smothering our society and damaging competition and competitiveness. And it looks like the Italians here are taking the lead because I think that once they get a taste of this, that this is gonna look attractive — poor choice of words — once they get a load of this, the feminists and the leftists in our country are gonna say, “Why didn’t we think of this?” Menstrual cycle leave. That’s once a month! That could be a week a month paid leave. 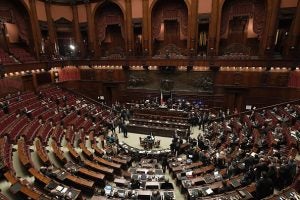 So they’re gonna try it in Italy. It’s being debated right now in the country’s parliament. “If passed, it would mandate that companies enforce a ‘menstrual leave’ policy and offer three paid days off each month to working women who experience painful periods,” which they all would, by definition. “Health experts and local media outlets have praised the proposal –” of course they have. “– saying it was a step in the right direction and would shed light on the silent plight of women suffering from debilitating cramps that can sometimes affect their ability to work.

“The Italian version of Marie Claire described it as ‘a standard-bearer of progress and social sustainability.’ But the bill also has critics, including women who fear this sort of measure could backfire and end up stigmatizing them.” You think? You think it could? (interruption) What do you mean, who would ever say anything? If you get three days off every month, is not everybody gonna know why? Women are gonna start getting roses when they have the cramps. Men are gonna reach out, try to show their sensitivity and understanding.

It would become stigmatizing. And then the men, men’s rights activists are gonna want to get in on this somehow and find a way to equalize it. What would the equivalent be? The women get menstrual cycle leave. Well, no. The men don’t have to deal with it because the women are gone. I mean, see, that’s exactly right. You know what’s gonna happen with this? Here’s exactly what’s gonna happen. This is gonna pass and in Italy women who work are gonna get three days every month for menstrual leave. However, the actual cycle is not the worst aspect of it. It is the premenstrual period, PMS, that leads to the real problem, is it not?

I on this program long ago suggested when women in combat was proposed that we have a battle-ready battalion, All-American 1st Cavalry Amazon Battalion, and you house them in such a way that whenever you need them, there is a portion of them that are always on the cycle. So you would have a battle tested — but that’s above and beyond this.

The next phase of this, well, it’s not just the three days. What about the period beforehand which is often worse, some activists would say. And the Italians will accede to this. And so the menstrual cycle leave will end up being a week to accommodate the premenstrual period and the actual menstrual period. And I’m telling you this is gonna spread. And wait ’til they find a way to blame the employer for this happening in the first place, or men in general.

“Writing in Donna Moderna, another women’s magazine, Lorenza Pleuteri argued that if women were granted extra paid leave, employers would be even more reluctant to hire women, in a country where women already struggle to integrate the workforce. 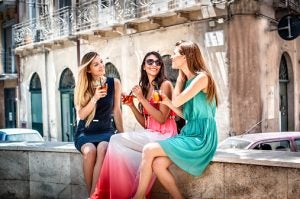 “In fact, due to enduring cultural stereotypes, Italy has one of the lowest rates of female labor participation in the workforce , with a staggering one in four women getting fired just before or after getting pregnant, according to the Italian National Institute for Statistics.”

Do you think this is the first place to have discussed or instituted this? Well, it isn’t. “Menstrual leave is already a legal right for women in other countries, including South Korea and Japan, where it was made law 60 years ago. A number of private companies, including Nike, have also introduced a similar policy.”

So there you have it, ladies and gentlemen, menstrual cycle paid leave in Italy. Only a matter of time before it hits the United States en masse.